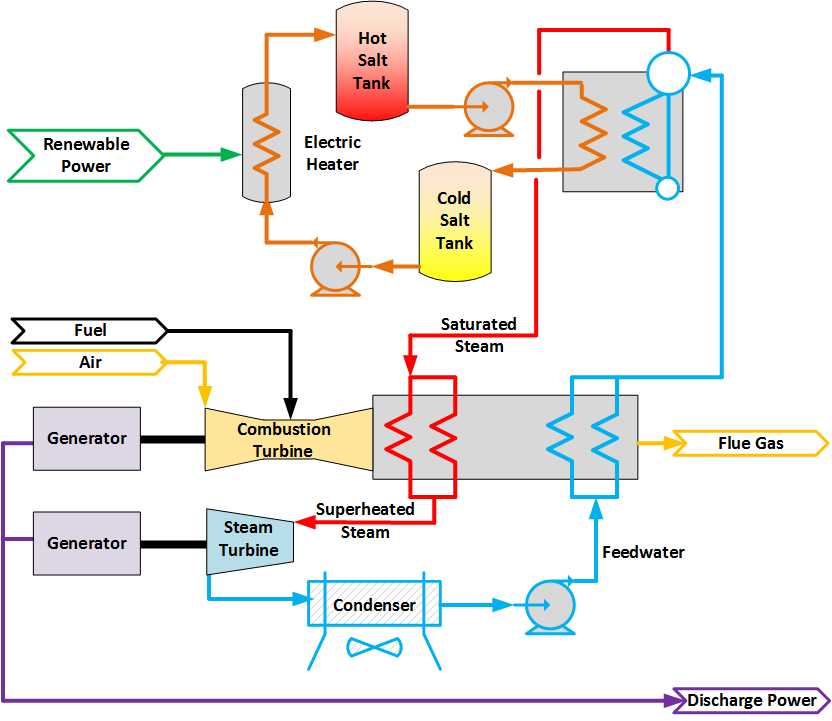 How is it different?

Conventional practice to boost power (supplemental firing using a duct burner) worsens the fuel heat rate and increases emissions. In contrast, LSCCs’ has an exceptionally low fuel Heat Rate, less than 5000 Btu/kWh LHV, thanks to the large increase in steam flow, which is due to the synergistic use of stored energy for evaporation and exhaust energy for sensible heating.

To be sure, the LSCC displaces fuel by using stored electricity, which is often in excess and is low cost. This in turn reduces the marginal cost of energy.

How does it work?

The LSCC charges from the grid when electricity prices are low due to renewable over-generation, and discharges when power is needed.

Charging. Liquid salt stored in the cold tank at about 250°C (482°F) is pumped through an electric heater which heats it to 427°C (800°F) for storage in the hot tank. At this temperature, low-cost carbon steel is suitable for vessels and piping. Medium voltage heaters, such as from Chromalox, are economical and efficient, respond quickly to variations in renewable generation, and are infinitely controllable.

Storage. The salt is held in insulated storage tanks, with heat losses typically less than 1°C per day. This type of tank has been used for decades by the Concentrating Solar Power (CSP) industry in the U.S., Spain, and North Africa to provide thousands of Megawatt-hours of energy storage.

LSCC typically uses a low freezing point (142°C/288°F) eutectic salt such as Hitec® salt from Coastal Chemical, to provide months of standby without risk of freezing in the tanks. This also reduces the need to operate heat tracing on piping and valves.

Discharging. Hot liquid salt is pumped from the Hot Tank, through a Steam Generator, and then to the Cold Tank. On the steam side, feedwater is pre-heated by exhaust gas, evaporated in the Steam Generator using stored energy, and then superheated by exhaust gas. Superheated steam produces power in the steam turbine generator, condenses and is recycled as feedwater. In parallel, a combustion turbine produces power and exhaust gas, which is used as described above.

The LSCC technology can be integrated with any combustion turbine from any manufacturer, at any size, whether existing or new build. The technology provides substantial fuel savings, more power output, and efficient use of stored energy.

Hybrid storage technologies use two energy inputs – electricity during charging and fuel or waste heat during discharging and can discharge more electric energy than was stored. Since an efficiency greater than 100% is potentially confusing, PTC-53 follows the practice used in conventional power generation and expresses the efficiency as the energy input per unit of electrical energy output.

LSCC can be implemented at virtually any scale, from a few to many hundreds of Megawatts. The next figure illustrates how a simple cycle peaking plant could be converted to a large-scale storage facility by adding three 92-foot diameter tanks, each capable of holding more than a GWhe of energy.
Scroll Up